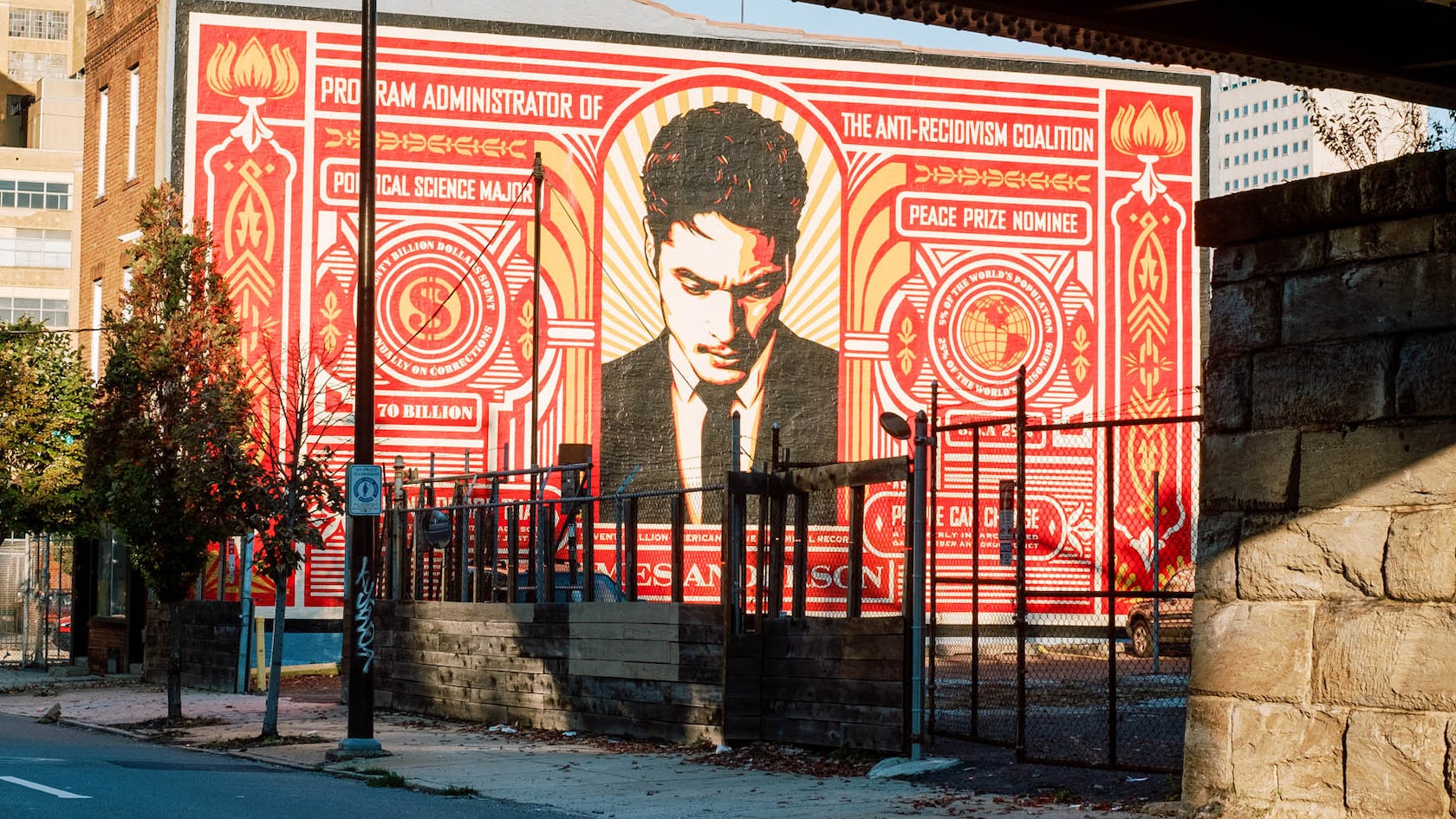 Art at the Park

Phase One of the Rail Park is home to plants and pathways. It’s also a canvas for some beautiful site-specific public art.

Explore the past and present artwork of the Rail Park below:

Stamp of Incarceration was created by Shepard Fairey as a part of the Open Source Exhibition in collaboration with the Mural Arts Restorative Justice Program. The mural features James Anderson, a human rights activist and Program Administrator at The Anti-Recidivism Coalition. The portrait is based on a photo by Barbara Davidson. This mural is one of two in a series by Fairey that centers on prison reform and mass incarceration, de-stigmatizing incarceration by highlighting the stories of people who have returned from prison and become integral members of society.

This mural was designed by Fairey, and painted on sheets of cloth by men incarcerated in Pennsylvania.

Shepard Fairey has provided a selection of his prison reform images for free download here.

Learn more about this mural

Just east of Broad Street at the entrance to the Rail Park, an 80-foot long laser cut steel wall, designed by Kate Otte and created at Cloud Geshan, reveals the industrial history of Philadelphia and the city’s legacy as the “Workshop of the World''. Based on an 1895 city atlas, the wall maps the city as it existed at the time, including logos, slogans, advertisements, photographs of building facades, signs, and product illustrations from that era, graphically translated into icons and placed in their historic locations.

The use of weathering steel in the design of the wall is consistent with other elements of the park, including the planter bases, giant swing supports and gates—a perfect visual complement to the remaining skeleton of the old railroad.

Dawn Chorus, by Brent Wahl with poetry selected by Laynie Browne was commissioned specifically for the Rail Park by the City of Philadelphia’s Percent for Art Program of the Office of Arts, Culture and the Creative Economy.

The piece has two complementary elements:

Dawn Chorus is designed to spark conversation and connect the ground with the sky, using imagery of birds, threads, and transmission. It is an exercise in looking up and down as we experience the Rail Park.

In October 2019, Friends of the Rail Park teamed up with Mural Arts and American Composers Forum to present the Site/Sound Festival, celebrating the past, present, and future of the Rail Park. Community workshops, panels, tours, and performances, temporary audio-visual art installations and diverse music performances brought to life a shared urban space from the tracks and thoroughfares that were once the terminus of the mighty Reading Railroad.

Check out the recap videos below!

Pictured: Your Fight is My Fight by Jenny Holzer

Long time Callowhill residents and artists, John Struble (also an FRP Board Member) and Michelle Liao, approached Friends of the Rail Park in 2020 with the idea to lease the billboard at 12th and Callowhill Streets to display local art. Through a contract with Clear Channel, Friends of the Rail Park has leased the billboard with support from individuals and organizations, like Philadelphia Contemporary, who sponsor the space to display artwork.

Photo by Julian Moore-Griffin from the Rail Park Block Party in June of 2022.

Using a Powering the Arts grant from PECO, Friends of the Rail Park commissioned Liberation Journeys by People's Paper Co-op, an ongoing women led advocacy initiative of The Village of Arts and Humanities centering women in reentry as leading criminal justice experts that our society needs to hear from, using art to amplify their stories, dreams, and visions for a more just and free world. The temporary park-wide installation highlighted the impact of the criminal justice system on women in Philadelphia, and celebrated their collective and individual journeys towards freedom.

Be the first to know about news, events, and progress.